How exciting that I’m now officially in my third and final trimester of pregnancy!  27 weeks have gone by and there is just 13 weeks left of what is usually a 40 week pregnancy!  We still have no decided how I will attempt to bring this baby into the world but I’m hoping to keep her in there baking safely until at LEAST 36 weeks!  This past week has gone by rather uneventfully again….sorry to keep the pregnancy updates so dull but truthfully a dull pregnancy is a happy and healthy pregnancy right?

Last Wednesday I had my gestational diabetes test and we got there first thing in the morning since I had to fast for it.  I was already starving by the time I got there but was even worse after drinking the glucose drink, waiting around for an hour and rushing off to my dental appointment!  Like I’ve said before I’ve never had an issue with drinking that darn glucose drink so I was able to get it down in the three minutes they want you to drink it in….about 20 minutes after I drank it I started to get really nauseaus which was probably because of how hungry I was.  I have not heard back from the doctor yet about my results but I should hear back at some point this week I am assuming, unless she’s on vacation.  I won’t be seeing her again this pregnancy except to talk about anxiety around the delivery but she is the one that ordered my gestational diabetes test so she is the one that will get the results.

Next Monday I have my 28 weeks OB appointment with the doctor who will take care of me from now until the baby is delivered and into the post-partum period.  He is the same doctor that I had with Jacob and a pretty nice man all around so I’m not feeling any anxiety about seeing him, just anxiety about the approaching due date and all the worry about how I will deliver this baby.  I’m hoping that my doctor has forwarded the results of my gestational diabetes test to him by next Monday so that he doesn’t make me take the test again because that would really suck….I’m still just hoping that I actually passed the test!  Pray for me!

The baby seems to be doing ok although on Friday night and Saturday she seemed to give me some worries when she stopped moving for a bit.  On Saturday night I finally broke my minimal sugar during pregnancy rule and had a gingerale (non-diet) and sure enough within 5 minutes she was moving and groving and letting me know she was ok!  Whew.  I still get worried about movement because lack of movement was what signaled us to the problems with Jacob and I’d truly like to avoid them this time around and bring a perfectly healthy non-NICU needed baby into the world.

Two people in our family gave us some really generous gifts this week and I thought I’d share!

We got this bedding set to do the baby’s room in…. 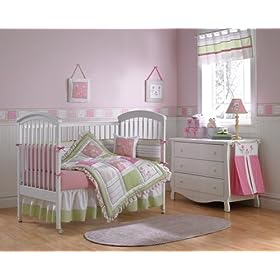 We needed a new car seat for this little peanut so we picked out this one….

It’s really nice to know we have those two big items taken care of and that means we don’t really need much more except our change table (which my mom is ordering for us soon) and a breast pump because our old one had BPA in it and I’m just not cool to use it.  We of course need several smaller items like change pads, crib sheets, girl clothing, etc.  I just have to sit down and make a list after going through all of Jacob’s stuff and seeing what we still need!

That’s it folks….27 weeks and nothing too exciting to report!  Once again, just how I like it!