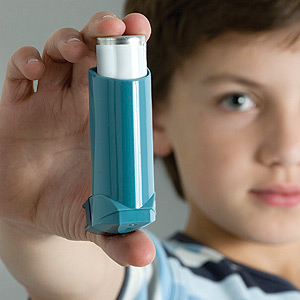 Most people out there are like me when it comes to their thoughts and opinions on asthma and it’s effects on someones life – I always had this vision of asthma in my head as a medical condition that causes someone to get out of breathe when they over exert themselves.  One of the first things that comes to mind are those pesky inhalers that asthma “people” carry around to pull out at the first sign of attack as though their life depended on it…I wish I had known just how true that last statement was.

Jacob has asthma and many people have asked us many questions in the past like “what kind of asthma does he have?”, “will he outgrow the asthma?”, and “how did he get asthma?”  The easy answers to those questions are that he doesn’t have any specific “kind” of asthma, he simply has asthma and there is a possibility that he can out grown the disease as he ages but that usually doesn’t happen until around or after puberty.  The answer to the last question is a bit harder to unravel because we don’t know for sure how Jacob got asthma except that maybe it has to do with  Mike and I both having seasonal allergies as children and still as adults, or maybe it’s connected to his premature arrival into the world, or it could also be the respiratory problems he suffered at birth…it doesn’t really concern us about how he got asthma, it only concerns us that he has it and we have to help him learn to live with it.

If we know anything about Jacobs struggle with asthma it is that the “kind” of asthma he has is very severe and horribly life threatening – it is so much more than taking an inhaler when you feel out of breathe after over exerting yourself.  The kind of asthma that Jacob is dealing with has the capacity to take  his life away if treatment is not administered effectively and fast and unfortunately this was a frightening lesson we had to learn this past week.  I will spare you all the scary details about how it all went down and do my best to give you a quick run down of the events that transpired in our family that all began when we were watching the Olympic hockey game on Monday of this past week.  Jacob had not been feeling well throughout the day but it was not really any illness that was particularily concerning to us as parents – he had the sniffles or “the snuffles” as he like to call them but was acting like his usually happy self for the most part.  Around dinner time we started to notice some signs that perhaps his cold symptoms were starting to affect his lungs (taking breathes between words when talking, and his skin retracting around his neck/collar bone)….so we started to try and administer his inhalers as a precaution.  It was all for naught because an hour later we were faced with firemen and ambulance emts in our living room and a son who was barely able to breathe and turning gray before our very eyes.

What ensued after the emergency crew intervention was the most terrifying 12 hours we’ve yet had to face since the day we brought Jacob home from the hospital because the emergency room physician and the pediatrician at the hospital try as they might could not find a way to bring the asthma under control and we watched anxiously and hopefully as treatment after treatment was applied….every one of them intended to help take away the strain and hard work that Jacob was using to try and simply breathe – we knew pretty much from the time Jacob was seen in the ER that the plan was for him to be admitted to the hospital because the asthma was just having too severe of an effect – we were worried but we felt we were placed into the right hands.  After a couple days and so much medication later Jacob was although not perfect, well enough to come home and be treated in his familiar home environment and we were really happy about that….

We’ve got a referral to the asthma clinic because Jacob’s asthma is so dangerous for him that he needs to be followed by a team of people that will help us identify triggers and learn to manage when the asthma starts to flare suddenly like it did this past Monday…..

Sure, the face of asthma sometimes looks like an out of breathe person bringing an inhaler to their mouth hoping to get some relief but it’s also a disease that has a more dangerous effect that a lot of times looks like this…..(photos courtesy of That Daddy Guys project 365) 5 thoughts on “The Scary Face of Asthma”