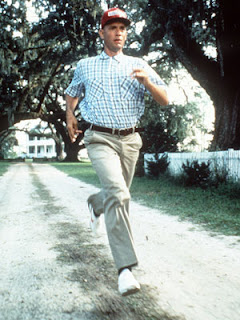 The guy we call Daddy around our house started running!  He started running and then he ran and he ran and he ran……he lost 50 pounds because of it and then he ran some more…until just after Christmas time when he twisted his knee while out on a run…and then he just — stopped.  I started to realize in the nearly two months that Mike was not running just how much he truly wanted to be out there running and it was obvious how discouraged and down in the dumps he would get every time he would try to run only to get pain in his knee all over again. With some advice from a another fellow runner in the family Mike was eventually able to make his slow start to running again in March and today we saw him compete in his first race ever.

Today the whole family headed out to High Park to support Daddy and Papa at Harry’s Spring Run-Off where they were racing in the 5K run to raise money for prostate cancer.  We took the subway to the park because we were just not willing to fight for a parking spot with the other over 5000 people attending the race! When we arrived at the race it was fun to see the kids experiencing the crowd and I felt the surge of excitement for Mike as we all crossed into the park and were suddenly into the atmosphere of the race location!  We walked Daddy and Papa as far as we could towards the start line and snapped a couple of pictures before they were off to the corrals.

Daddy and Papa ready to run! Our little family – all present to support and cheer on Daddy! Nana was there to cheer the Men on too! One last hug before Daddy is off to the start line! While Daddy and Papa were waiting for the race to start we all enjoyed some of the atmosphere including the park and free bananas, apples and bagels! We finally moved to the finish line where we were joined by Nan who had travelled independently to the park to see her son race in his first race!  I found a nice place for us all to wait and at one point Daddy and Papa ran past us while Nana and Jacob were getting some snacks so Violet and I cheered and waved and it was so cute to hear her yell out “GO DADDY GO!!”  and “GO PAPA GO!!”.  Papa was the first one to cross the finish line with a time of just over 27 minutes (a personal best for Papa who has run a couple of runs before) and Daddy was not too far behind him coming across the finish line in just over 29 minutes.  I knew in my gut that Daddy had wanted to finish in under 28 minutes but to be fair (and he knew this) he had only been running again for a couple of weeks and at that point had not yet run a 5K in under 30 since before his injury – so it was a victorious day all around….Daddy’s chip time was 29:34 and the time on his run keeper stats was 29: 25….we of course cheered like crazy as they both passed the finish line! We were all so proud and excited for both of them and Jacob enjoyed a little of Daddy’s gatorade after the race! Now Daddy continues to train for his upcoming half marathon on May 15th but before that him and Papa will have to conquer the Sporting Life Toronto 10K Run for Kids with Cancer on May 1st!  We will of course be there in full support despite the crowd of 15, 000 runners!  Eek!